KIM Jung Gi (let’s clear things out right away : KIM is a family name :)) is a korean artist born in 1975 in Goyang-Si in the province of Kyongki-Do (South Korea). At 19, he entered the Fine Arts School and  majored  in “Art & Design”. During 3 years,  he studied on the west coast at the Dong-Eui university of Busan which is famous for its technical courses. 23 000 fellow students may also have given him some nice material to start with as a source of inspiration ! As every man in Korea he also served in the army during more than 2 years, in the special forces section, which allowed him to memorize an amazing number of vehicules and weapons. 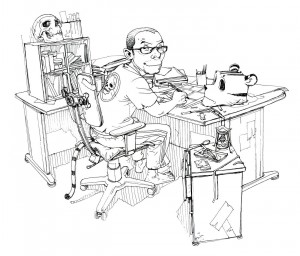 Between 2008 and 2010, he drew the 6 volumes of « TLT, Tiger the Long Tail » adapting a scenario from Seung-Jin PARK. This story first appeared as a ‘webtoon’ (online publication, which explains the unusual composition of the pages) then was later published in printed form by CNC Revolution editions.

Finaly, a museum has opened in Penang, Malyasia, to present his work in june 2015. At this occasion, he also entered the Guiness Book of Record for the “Longest drawing by an individual for the Fisheye Art” Illustration category.

Today, when he is not working for some korean company in advertising or managing AniChanga, his drawing school in Seoul, he’s travelling the world to meet his fans and get inspiration !

To know more about KJG, some articles and interviews :